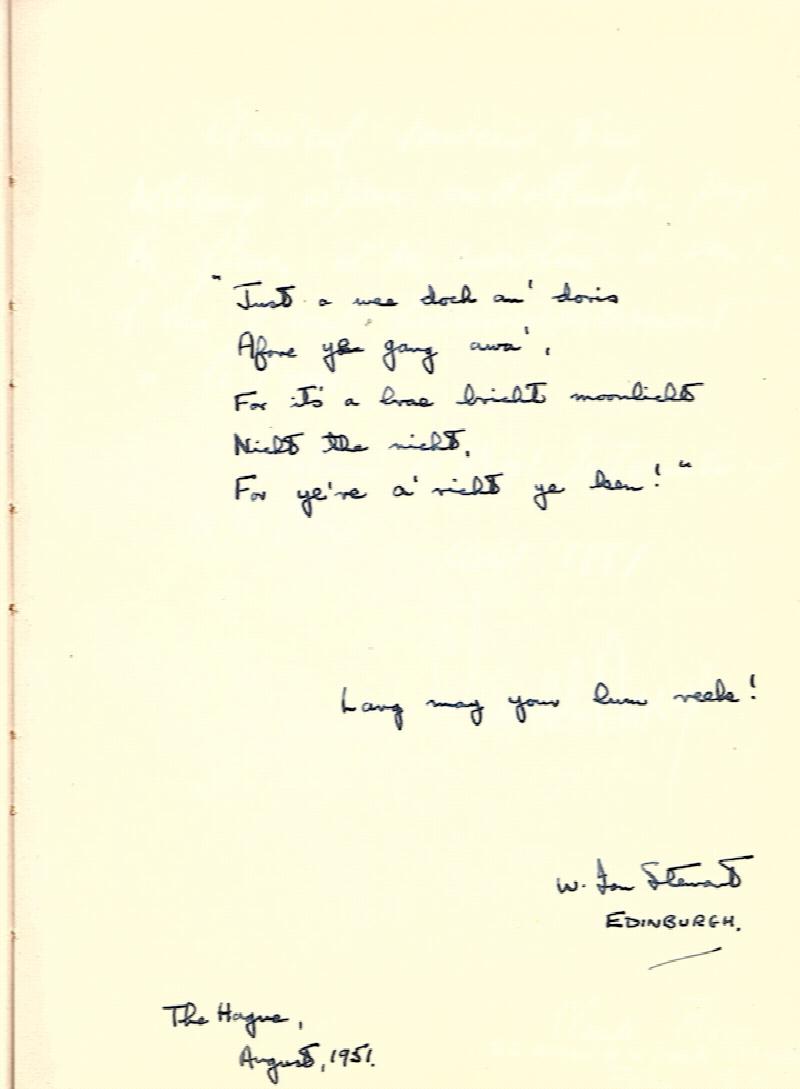 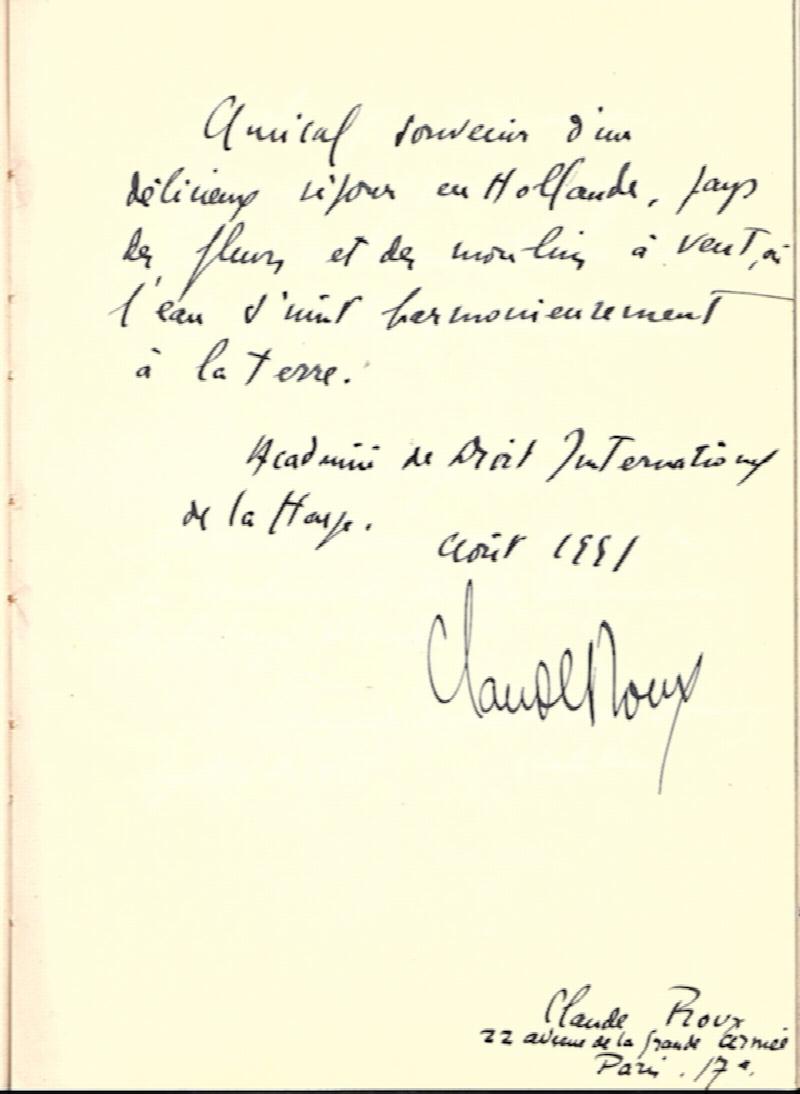 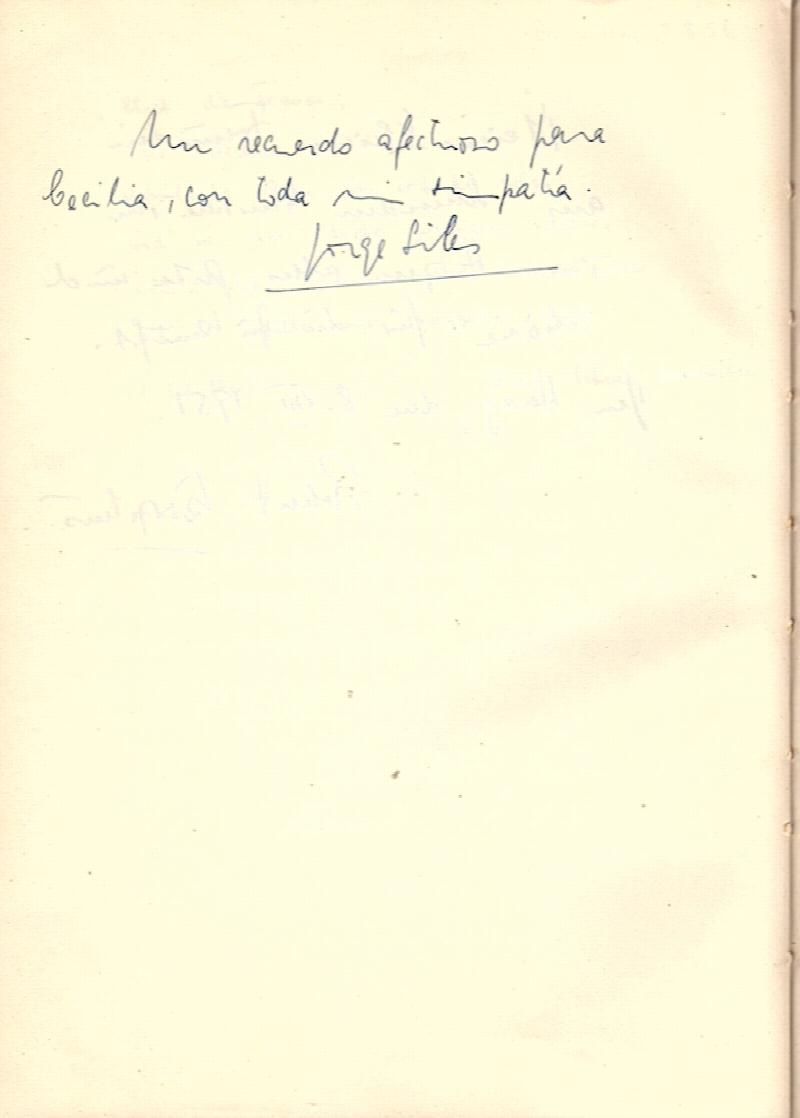 64p. Cover edges worn down to reveal the cardboard beneath. The first pages have scraps from a brochure from the academy mounted composing a title page of 1951 Hague Academy of International Law, Peace Palace, and the program for the 1951 academy followed by a collection of 19 greetings from 1951 academy attendees and 9 greetings from the 1954 academy attendees. Laid in preceding the 1954 pages is 2 loose leaves with Information Concerning the 1954 Session. (8-1/2"x6") The book was created by Cecilia Mandal (or Mandahl) of Sweden who attended the academy in 1951 and 1954. The signatures represent an assembly of young men and women lawyers from throughout the world. Identified signatures include those of W. Ian Stewart (Scottish Solicitor-General, 1973-4), Claude Roux (Paris Council member, 1965-1983), Fernando Montes de Oca y Gmez of Costa Rica, Jorge Siles and his brother, Luis Adolfo Siles (Bolivian Vice President, 1966-1969, and President 1969), T.P. Nedungade, and S. Natha Singh of Malaya.The Hague Academy of International Law has been in existence since the early 20th century proposed by Dutch lawyer Tobias Michael Carel Asser, who was awarded the 1911 Nobel Peace Prize. Although its courses were scheduled to begin in October 1941, the first courses took place in 1923, ironically postponed due to World War I. The Academy eventually because "a centre for teaching and research in public and private international law, with the aim of furthering the scientific study of the legal aspects of international relations" and continues into the 21st century. [Hagueacademy.nl]

Title: FRIENDSHIP BOOK OF GREETINGS AND SIGNATURES COLLECTED AT THE 1951 AND 1954 HAGUE ACADEMY OF INTERNATIONAL LAW

This website uses cookies either for the usage of analytics software, marketing software, and/or to supply social media features.
Read more here.