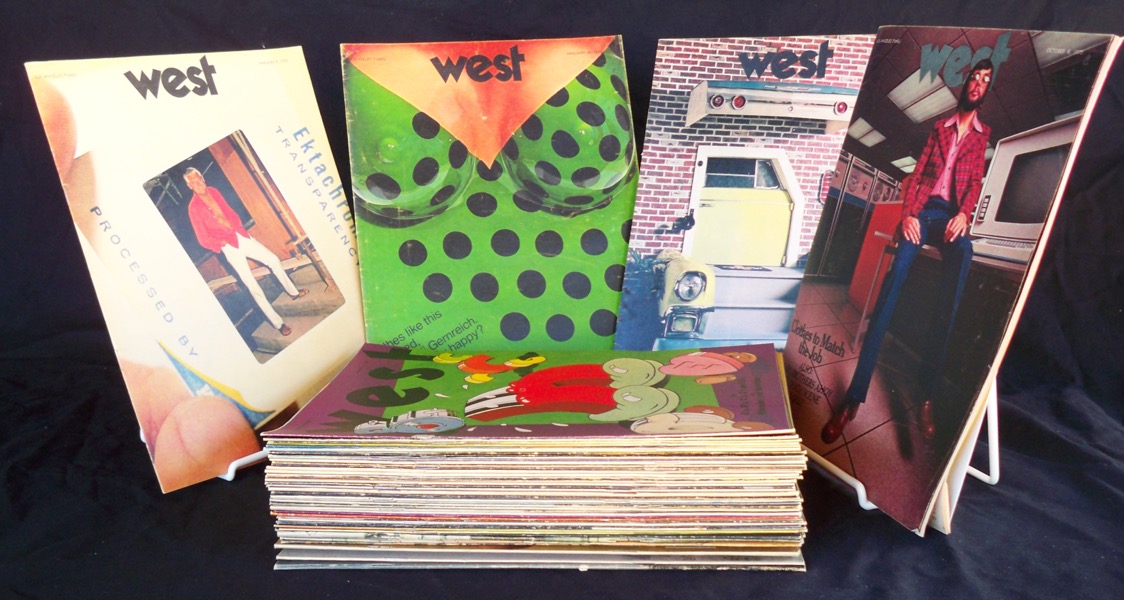 Thirty-nine issues of the Los Angeles Times Sunday supplement, West magazine. Some covers rubbed and creases along spine. B&w and color illustrations and photographs. (13-1/2"10-1/2") The Los Angeles Times West magazine began in 1968 as a Sunday supplement and ceased publication with the October 8, 1972 issue. Throughout its run, West became known for showcasing the Southern California lifestyle, sports, fashion, music, and culture, but most especially for its graphic design. As Steven Heller explains in an article on the Design Observer Cooperative site: "This storied weekly supplement of the Los Angeles Times, art directed by Mike Salisbury, was a masterwork of design erudition, appreciated by those who could care less about design. It was typographically innovative in a pre-post-modern eclectic mlange of styles and forms, but that was the least of its attributes. Salisbury injected West with such an abundance of pop culture visual richness that it was more like a miniature museum than weekly gazette. In the tradition of Esquire, Playboy, Portfolio, and New York, West was challenging and stimulating, the likes of which are rare in magazines today."Items of note in the 1972 issues are: articles on Gypsy Boots, the Los Angeles Garment District, boxer Archie Moore, Taliesin West, and LA radio and interviews with Henry Miller, Rudi Gernreich, Gloria Steinem, Frank Robinson, Jean Renoir, Vidal Sassoon, Huey Newton, William J. Pereira, Dr. Seuss, and Charles Eames.

This website uses cookies either for the usage of analytics software, marketing software, and/or to supply social media features.
Read more here.